You’d think from conversations in progressive philanthropy that we all agree that there are two sources of power in democracies: organized people and organized money. You might also think that progressives’ commitment to realizing democracy for every American would come with the following realization: that the only way for many communities of color and low-wealth communities to engage in self-governance on any semblance of an even playing field is through organizing. Unfortunately, philanthropy invests a fraction of one percent of its giving in organizing. To make matters worse, progressive organizing groups lag behind almost all other sectors in the nonprofit space in scaling independent revenue generation programs to fill the void.

In 2003, I was hired to build Greenpeace’s grassroots department. My ambitions far outstripped my $20,000 annual budget. I knew that philanthropy barely funded organizing. If I wanted to scale Greenpeace’s organizing work, I needed to scale my team’s independent revenue. Our first organizing program invested in student leaders and was substantially funded by the Greenpeace Semester, a tuition-based, semester-long training program. Our field organizing program was funded largely by the canvass that my team started, which raised about $25 million of unrestricted 501(c)(4) donations per year from dues-paying members. All told, we raised about one quarter of a billion dollars of unrestricted 501(c)(4) funds from my team’s programs over my tenure. This gave us independence, the (c)(4) resources to do candidate work and direct action, and a member oriented mindset.

Most progressive local, state, and national organizations don’t have the resources to invest in such programs. They don’t have reserves to finance their proven revenue generation projects. And while philanthropy provides some general support, that general support is often restricted for work on a set of issues.

There is a role for philanthropy to play, not only to fund more organizing but to provide catalytic funding to achieve what Jason Garrett, long-time organizer, entrepreneur, and now program officer at the Ford Foundation, calls the 50/50 rule: fifty percent of organizing groups’ funding should come from philanthropy and fifty percent from their base and businesses.

Many foundations and philanthropists understand the importance of organizing: Ford Foundation, Open Society Foundations, and Jessie Smith Noyes Foundation, to name a few. But fundamentally, philanthropy writ large has failed to embrace power building through community organizing as a key tool for change, relying on a theory of change that is rooted in research, analysis, and communications. According to an analysis provided for this article by the National Council on Responsive Philanthropy, “grassroots organizing” funding only made up about 0.1 percent of total grantmaking from 2014-2018. Among the few funders that do believe change happens because of organizing, many focus on a narrow portfolio of issues; they are willing to support base-building to win victories on that issue but not to build power more broadly.

Under-funding organizing makes the long arc of history towards justice much, much longer.

In her book, The Self-Help Myth: How Philanthropy Fails to Alleviate Poverty, Erica Kohl-Arenas showed how grassroots groups morph their work into “nonthreatening service or ‘civic participation’ programs in keeping with [philanthropy’s] current funding priorities,” crippling progressive organizations’ ability to focus on community-defined needs that would build their base and credibility. Kohl-Arenas rightly argues that “this model…doesn’t produce permanent community-based power or the capacity needed to sustain it.”

We in philanthropy rely on organizations with organizing capacity to exist for the times when our strategies require that capacity. But we fail to invest in the long-term base building necessary to maintain it. We see this in the boom and bust cycles of civic engagement funding and with each strategic shift to new issues within each foundation. This kind of inconsistent investment means that — at the moment when we need power on the ground — progressive groups have often been starved of resources. If good strategy is what you do with your resources to achieve your goal in a changing world, then we’re neglecting the very foundation of good strategy: the resources and capacity of the movement.

Andrea Serrano, executive director of OLÉ New Mexico (one of my organization’s grantees), explains the damage election-based investment can cause to organizations on the ground: “When you’re knocking on someone’s door in an election cycle, they’re like, ‘Great, you’re just here because you want my vote.’ But when you’re talking to someone in the middle of April, off cycle, and you’re just asking that person, ‘What’s important to you?,’ that creates a different kind of relationship with our community.” Serrano is prioritizing non-institutional funding efforts this year so that her team is “resourced to have these conversations daily.”  OLÉ’s membership has been fighting for permanent funding for early childhood education in New Mexico for eleven years.  The state legislature recently approved a ballot measure for a constitutional amendment that would guarantee a right to education to children younger than five years old, thus diverting money from the Land Grant Permanent Fund to provide a consistent stream of funds to offer universal preschool for three and four year olds, improve childcare and enhancing home-visiting programs for new parents.

Eleven years in the making. Thousands of door knocks. This kind of long-term work to build infrastructure and move issues requires long-term support.

All politics is local. Federal change happens when we’ve built enough power locally. Ending police violence will take organizing town by town to pressure police departments, mayor’s offices, and district attorneys. On climate, there’s plenty of money for clean energy on the table from the federal government, but there are 30,000 people serving as mayors, school board members, city and county councilors who also need to be pushed to actually switch to the clean energy, electric buses, and green buildings that the Biden Administration is championing.

Philanthropy should do more to fund organizing capacity, full stop. But that is not the entire answer. At the Progressive Multiplier, where I serve as CEO, we work to provide financial and technical support to organizations developing scalable models to fund organizing, supporting organizing groups to achieve scale, self-determination, and sustainability. This is an incredibly high-leverage approach: for every one dollar we’ve granted to groups, they’ve raised $5.85. I’m privileged to have a bird’s eye view of the creativity of groups on the ground working with the PM and our allies in Accelerate Change, Worker’s Lab, New Media Ventures, New Left Accelerator, as they tackle the challenge of building revenue generation models to fund organizing. Here are a few examples that illustrate the types of work movement leaders are doing across the progressive movement:

None of these pilots can be tested without funding, and none can scale without financing. Transforming the capacity of the movement requires a combination of technical and financial support for such pilots, shared learnings across the movement, and a sizable pooled recoverable grant fund to finance successful organizations.

None of this, like in organizing, is easy. For progressive nonprofits, building scalable revenue programs requires a team leading the work that is more outcome oriented than process oriented. A team that is  driven, rigorous, passionate about constant improvement, and accountable to very measurable outcomes. It requires an openness to experimentation and failing forward fast until you succeed. A culture that celebrates tests failing as long as the team executed the test well enough for real lessons to be learned. It requires getting out of old mental traps of being risk taking or risk averse, and instead learning to manage the risks we choose to take so that you can succeed.

For philanthropy, we can no longer assume that someone else will fund the groups we stop funding to maintain their capacity for the next time we need that group’s capacity. We need to invest in the leaders on the ground building the power that makes all of our hopes possible.

We all need to stop putting policy ideas before power, program strategies before the people who we need with us.

At the onset of the pandemic, organizers at Virginians Organized for Interfaith Community Engagement (VOICE – an affiliate of Community Change) asked 2,500 people around the Northern Virginia region “If you could change one thing to make life better, where would you start?” People shared heartbreaking stories about being on the verge of eviction. So the organization centered its work there and did the critical advocacy work of keeping people in their homes, asking their members and friends of VOICE to step up around what would make an immediate and significant impact on the community.  VOICE can truly serve its community because they are primarily funded through membership dues and individual donations. Senior organizer James Pearlstein believes, “We’re accountable back to local leaders and that makes everyone’s investment run deeper. It changes the nature of who feels ownership of the organization and its responsibility to create something better in the community.”

Interestingly, Pearlstein credits the fact that he received a peculiar type of funding from philanthropy to meet the moment of the pandemic housing crisis in Northern Virginia. “[philanthropic support for fundraising] was critical in that it gave us the ability to invest just in fundraising itself – we didn’t have to do it “on the cheap” like we usually do. We turned an $18K grant into $108K – that’s a 6:1 return.”

What did the $108K in revenue allow VOICE to do?  What they have done again and again with the dues they raise: hire yet another organizer. 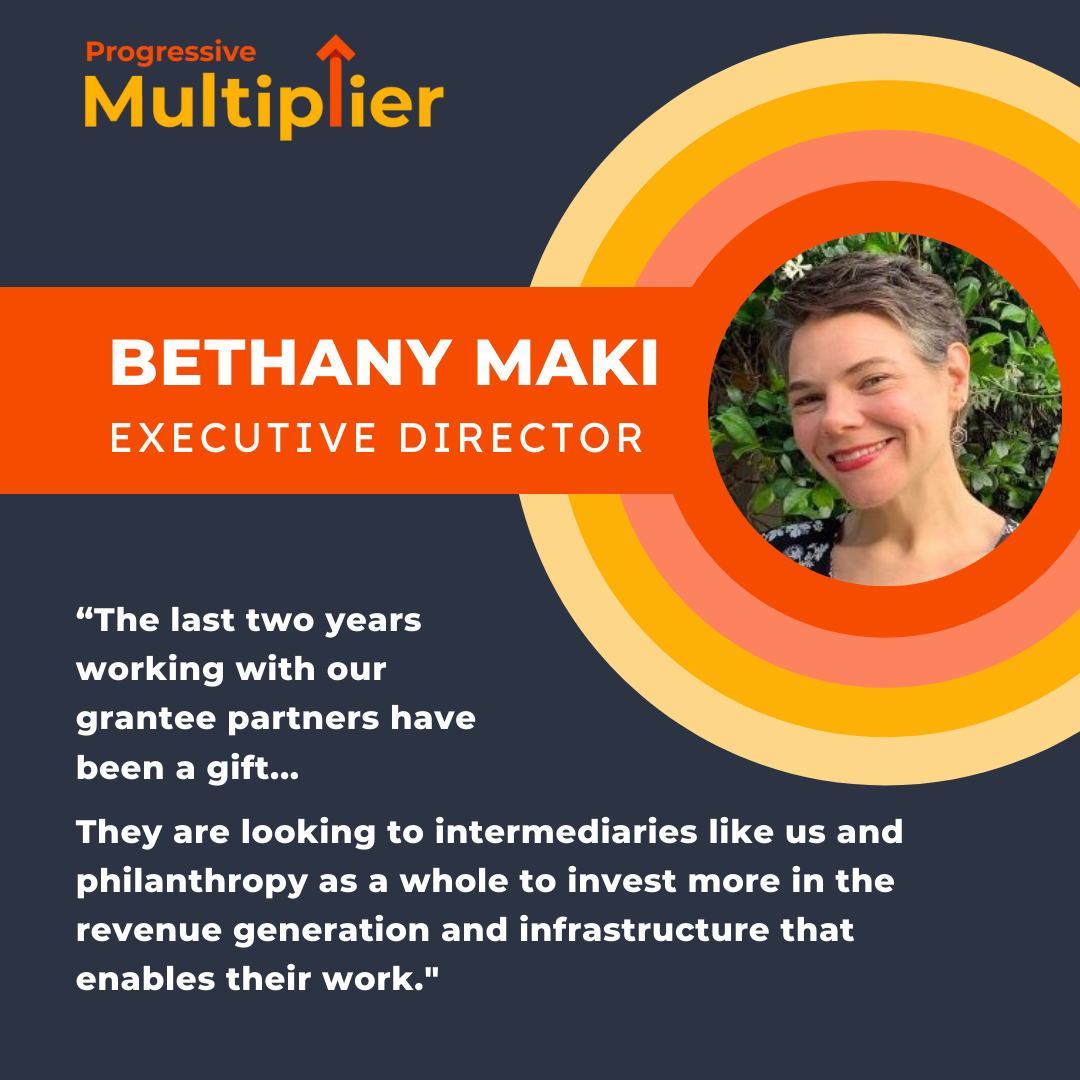 The Progressive Multiplier, a funding intermediary that helps progressive nonprofit...

Join us for a conversation on a new approach to revenue generation and the launch of the Progressive Stimulus...