That was the question Gabriel Solis, Executive Director of Texas After Violence Project (TAVP), was asking himself three years ago. An expert in police violence, mass incarceration, the death penalty, and the impacts of violence and trauma on individuals, families, and communities, Solis became the organization’s executive director in 2016. Until that point, TAVP had been primarily funded by a single family foundation.

“We’ve been year-to-year and struggled with sustainable funding,” Solis said. The idea to develop online continuing learning education (CLE) training did not start as a revenue generation concept, rather it was about changing the way people in the legal and mental health fields think about the effects of trauma on their clients. When Solis connected with the Progressive Multiplier at an Open Philanthropy gathering in May 2017, the evolution of this program into an alternative revenue stream began.

“The Progressive Multiplier grant 100% allowed us to experiment with this concept without compromising our already limited funds,” Solis stated. “Without it, this new channel would have never opened up for us.” After working with the Progressive Multiplier team throughout 2019, TAVP launched five online trainings in November on a range of topics for attorneys, mental health professionals, social workers, educators, advocates, activists, memory workers and others interested in ending cycles of violence and trauma, and working to achieve transformative justice.

The marketing of the trainings is in pilot phase and showing signs of revenue generation success. Solis now feels, “…incredibly optimistic about the long term viability of this organization. The CLE trainings were the start of a focus on earned income we never had before. Progressive Multiplier really shows the art of support that goes beyond the financial – getting started with a project like this when it’s so out of your field of expertise goes beyond funding.” Training coordinator Bryn Starbird added, “The biggest help and surprise of this project has been having a funder that supported us learning versus just giving us money – that unique relationship has made this all possible.” TAVP is expanding their revenue generation projects in 2020, including selling e-learning materials for community-based archivists.

Asked what he hopes for in terms of funding in the future, Solis said, “…We’re right in between the realms of criminal justice reform and cultural heritage and identity. The identities of the people we work with are all informed by violence and trauma. It’s been hard to communicate how vital our work is into the rigid matrix of philanthropy. To transform justice, you have to understand the why and how behind the need for transformation. That is harder to quantify than the immediate criminal justice reform needs like reducing the number of women in prison at a county level. But they’re critically interconnected. My hope is that philanthropy continues to evolve to support the multi-dimensionality of our work.” 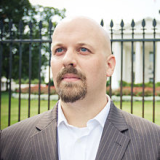